As entries pour in for the ever-popular Hansa Fish River Canoe Marathon ahead of the looming normal entry deadline, some of the nation’s best paddlers – including the likes of 2014 Dusi winner, Sbonelo Khwela – have signed themselves up for the two-day Eastern Cape assignment from 7 to 8 October. 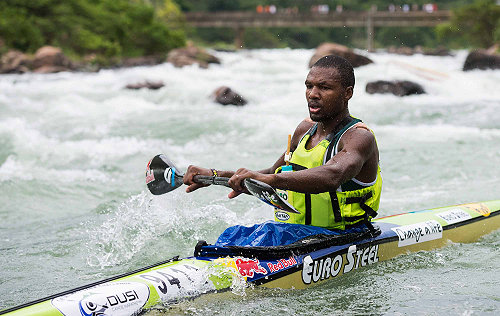 Normal entries close on Friday, 9 September and despite an early lull in the uptake of entries, organisers recently noted the surge in interest caused by the traditional last minute push for discounted entries.

Khwela is one to have added his entry to the pile already and hopes that this year’s Hansa Fish River Canoe Marathon from Grassridge Dam to Cradock Sports Complex will see him finally break his K1 top 10 drought.

Known for his remarkable portaging abilities and dogged determination on the water, Euro Steel/Red Bull’s Khwela won the FNB Dusi with K2 partner, Andy Birkett in 2014 and has already notched up five Non-Stop Dusi crowns.

Outside of his familiar Valley of a Thousand Hills surroundings, Khwela has too put in some strong performances – including a seventh place K2 finish alongside partner Brett Bartho at the Hansa Fish in 2013.

In a K1 though, eleventh in 2014 – 43 seconds off tenth placed finisher, Richard von Wildemann – is the best Khwela has been able to muster, something he is eager to change.

“I always aim to finish in the top ten in my K1 at Fish,” explains Khwela.

“I have the best training programmes, the best equipment and I always give my best, but I’ve never got that top ten, so that is what I’ll be aiming for again this year!” he adds determinedly.

Despite his undoubted talent, Khwela is quick to point out that the Hansa Fish is notably dissimilar to his much-loved Dusi and Non-Stop Dusi clashes.

“The Fish River is completely different to the uMsundusi and uMngeni Rivers.

“It has much bigger rapids than we have nowadays in KZN, there are a lot more flat sections and the trees – oh my word; you need to know exactly where you’re going when you come to the trees!

“Fish is also a different type of race.

“It is often so cold early in the morning at the dam, starting on the dam suits the marathon guys a lot more and the distance on day one means it’s a long, long way.

“Hopefully this year, if I can make sure I stay with the guys across the dam and am in the top ten after the first portage, then I can finally achieve my goal – finishing the top ten at Fish in my K1.”

His struggles with the race’s unique characteristics together with the distinctive Hansa Fish atmosphere, keep Khwela looking forward to the annual Eastern Cape journey.

“I always love going to the Fish!” confirms Khwela.

“It is such a fun race to paddle and there is always a great vibe at the Fish.

Paddlers will have until 17h00 on Friday, 9 October to take advantage of normal entry fee, whereafter penalty fees will ensue as per the late entry protocol.