From it’s position as one of the biggest canoeing races in the country, and one of the most popular river marathons worldwide, the Fish has grown phenomenally from it’s humble beginnings in 1982.

It all started in the seventies, when the Orange River Project started pumping irrigation water towards the eastern seaboard, and bringing lots of distinctively milo-coloured water to the Fish, Little Fish and Sundays River Valleys.

Cape paddler Dave Alexander was one of the first to see the potential of the river for canoeing. He was contacted by KO Bang, who was the Circle Engineer at the Dept of Water Affairs in Cradock, and they put an article into the Midlands News in 1979, looking for paddlers keen to try out the rejuvenated river. There was no response.

But the word got out. A few months later, a few PE paddlers made the trip to Cradock, and gradually the reputation of the river spread. Thanks to their involvement, the Karoo Canoe Club was founded in 1982, and driven by the likes of Stanford Slabbert, Fox Ledeboer, John Harington and Giles Hobson, the first ever Fish River Canoe Marathon was cautiously included in the national race calendar that year.

The first race attracted 77 paddlers in 52 boats. 37 boats finished the race, as the thick willows and many fences on the upper stretches of the river took their toll. It was won by Sunley Uys from Chris Greeff (the first person to shoot Cradock weir in the race), Graham Holm, Stanford Slabbert and Mynhardt Marais. 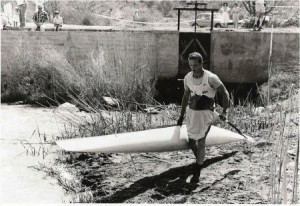 In those days, the race was held on a much lower river, 13 cumecs (roughly half of the current level!) and it started with a very long first day (over 50km). The paddlers left the Grassridge Dam wall and paddled back around the island on the dam before hitting the river, eventually finishing at the Baroda weir, 2,5 km below the current overnight stop.
The paddlers all camped at Baroda overnight, before racing the shorter (33km) second stage into Cradock.

Stanford Slabbert says of the first race “In those days the paddlers had to lift the fences, and the river mats (fences weighed down by reeds and flotsam and jetsam) took out quite a few paddlers. Getting under (or over) them was quite an art”.

“I recall one double crew”, says Slabbert. “The front paddler bent forward to get under the fence and flicked the fence hoping to get it over his partners head as well. It didn’t. The fence caught his hair and pulled him right out of the boat and they swam!”

Legends were already being born. Herve de Rauville stunned the spectators by pioneering a way to shoot Marlow weir. He managed to reverse his boat into the chute on the extreme left, and took the massive slide back into the river going forward, and made it!

The field doubled in 1983, as the word of this great race spread. 145 paddlers in 110 boats. It was won on debut by Joburg paddler Niels Verkerk, who recalls, “It was a very long first day, especially as the river was not as full as it is now (it was running at 17 cumecs in 1983). Less than half the guys shot Keith’s, which was not that bad as the hole at the bottom wasn’t that big. Very few people shot Cradock weir in those days. I won the race without shooting Cradock”, he added.

At a medium level, the lines at Soutpansdrift were also different. The weir above Soutpans was always a problem, as there was no chute, and even the pipes that created a slide down the weir face were introduced much later.  At the bottom of the rapid, the only line was extreme left, underneath the willow tree, and then a sharp turn at the bottom to avoid hitting the rocks, where the spectators gather in numbers.

In 1986, the race moved the overnight stop from the harsh arid campsite in between the thorntrees at Baroda weir, to the Sulphur Springs campsite, where the Cradock Spa was luxurious in comparison. 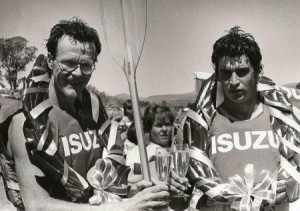 The next major change came in 1989, when the race was awarded the SA K2 Champs. Prior to that the general philosophy was that the Fish was a K1 race. The willows and fences made K2 racing too dangerous, and the early races tended to have about 75% K1s racing.

In 1989, the start was shifted to the east bank of Grassridge dam, using the Le Mans style start, shortening the paddle on the dam significantly. Also, at around that time, more water was available for the race (around 23 cumecs) but the organisers used to turn off the water to allow the paddlers to have around 17 cumecs for the first ten kilometers through the willows and including Keith’s Flyover, before catching up the extra water.

Also in 1989, the overnight stop was moved to the bridge at Knutsford, further shortening the first stage.

By 1994 the race had over 1000 paddlers, taken equally from the Cape, the Highveld and Durban/Pietermaritzburg, as the race is handily positioned in between these centres. The 1994 race was also the SA K2 champs, and the race had the distinction of holding an SA Championship every year after that until 1999, and then again in 2001.

Further changes to the course came in 1995, when the race organisers raised funds to build a chute down the massive Marlow weir, as part of their drive to eliminate portages on the race. In 2000 a chute was added to Soutpans weir, making for a much safer passage. The Double Trouble Chute was added to Collett’s Weir in 2010, and a chute to the big Knutsford weir at the start of the second day in 2015.

To cater for the broadening interest in the race a Short Course option was added ion 2013, offering less experienced paddlers the opportunity to race the easier half of each day and still enjoy the Fish atmosphere.

Over the years the race has been supported by a number of sponsors, without whose support the rapid growth of this event would not have been possible. These include Sunseeker, Isuzu, and Kahlua, Powerade and Hansa.