As entries opened for the 33rd edition of the popular Hansa Fish River Canoe Marathon in the Eastern Cape on 10 and 11 October, the race celebrated the announcement that it has been awarded the SA K3 Championships for 2014. 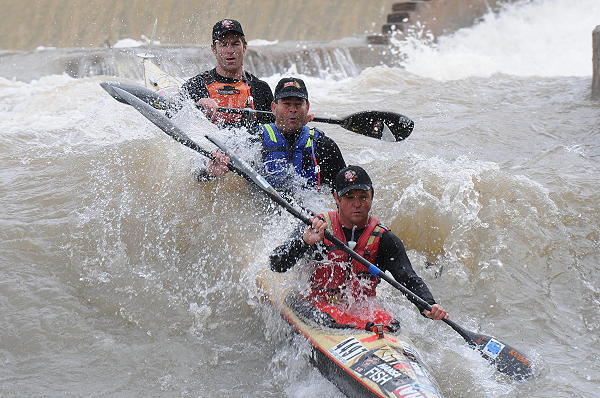 The Hansa Fish already holds the world record for the number of K3s participating in a canoeing event – 78 set in 2012 – making the decision to award the national championships for these unique craft to the event a logical one. The organisers are bracing themselves for a large influx of K3 entries and as such, that record will in all likelihood fall this year.

K3s have a unique history that is closely intertwined with the snowballing popularity of the two-day 82km race down the Fish River from Grassridge Dam to Cradock.

Initially controversial because many administrators felt they would be too unwieldy for typical South African river marathons, K3s were designed in South Africa and first raced in 2003 where they caught on immediately at the Hansa Fish as the long distances, flowing water and rapids largely free of rocks suited these three-seater craft well.

The race became the first South African river marathon to formally accommodate K3s as a separate class and in recent years a growing number of elite athletes have taken on the two-stage classic in K3s, intent on setting class records.

Herman Chalupsky convened an imposing K3 crew in 2009 consisting of fellow Durbanites Andre Pohl and surf lifesaving Iron Man Matt Bouman, easily winning their class in a time of 5 hours and 9 minutes, a result that has stood as a the K3 record ever since.

The paddling community has often speculated about the possibility of an elite K3 clocking a sub-five hour time for the Hansa Fish, a feat that has been accomplished by several classy K2 boats in the past.

The women’s K3 record, established in 2010 by Nikki Irvine, Alice Rawlinson and Karen James of 6 hours 51 minutes is far more likely to fall in the big field of competitive K3s expected at this year’s Hansa Fish.

Since their introduction twelve years ago, K3s have found their way around the world and have caught on at both the Liffey Descent in Ireland and the Avon Descent in Western Australia.

They provide a great opportunity for a less experienced but proficient paddler to enjoy the thrills of rough water racing, sitting in the middle seat of a craft between two seasoned Hansa Fish paddlers.

In 2012 former Springbok captain Corné Krige did his first Hansa Fish in a K3 crewed by experienced locals Billy van Zyl and Pieter Marais as part of his charity fundraiser for his Corné Krige Children’s Charity.