Andy Birkett and Nicky Notten played a last minute master card to come from behind to win the Fish River Canoe Marathon on Saturday from Jasper Mocké and visiting French international Cyrille Carré.

Mocké and Carré were the first to negotiate the big Cradock Weir twenty minutes from the end of the race, and were holding all the cards as Birkett and Notten turned to some detailed local knowledge gleaned from their many days of training on the river.

“We have checked out the last few kilometres of river carefully, just in case we needed to find a spot where we might be able to overtake if we were chasing the race,” explained Birkett.

“We had marked a few rapids where we knew we could come past using a small channel or current. We both sensed we needed to do something special and when we got to one of those channels, Nicky just fired the afterburners in the back.

“It worked! We took the lead, with the adrenaline from Cradock weir helping, and we managed to stay there to the finish,” said the Euro Steel star.

Earlier in the day an accident in the Coccyx Rapid ended the challenge of joint overnight leaders Hank McGregor and Hamish Lovemore, and almost took Birkett and Notten out with them.

“They paddled into a submerged rock in Coccyx Rapid and it sounded like a gunshot when they hit it,” said Mocké.

Birkett and Notten were right behind them and slid underneath their kayak as it came to a sudden standstill, grazing Birkett’s left forearm in the process.

“I honestly don’t know how we didn’t manage to swim there,” said Birkett afterwards.

Clinton Cook and Wayne Jacobs held onto their overnight fourth, with the on-song Under 23 Border locals Josh and Matt Fenn moving up to fifth as the luckless Murray Starr and Stew Little ran into technical rudder problems on the final stage.

The women’s race provided a thriller of a duel between the crew of Christie Mackenzie and Bridgitte Hartley and the world marathon championship medallists Jenna Nisbet and 17 year old Saskia Hockly.

After initially deciding to shadow the experienced Nisbet and her partner Hockly, the pairing of Hartley and Mackenzie shelved their conservative plans midway through the stage and decided to charge away alone, sensing that their opponents may have been tiring.

They capsized in the big Coccyx Rapid, but they managed to recover quickly and remain in control of the race.

“I was backing us to shoot Cradock Weir, but we chatted about it and decided that we had a lead of a minute and a half at Marlow Causeway and we really wanted to win this race,” said Hartley.

“We are lucky that we have come off a really strong base from the world champs, and we knew that we could go out on our own today, which is what we did,” added Mackenzie.

Nisbet and Hockly wrapped up the women’s silver medal at the end of a race that captivated those following the event, with Jordan Peek and Pippa McGregor making up the balance of the podium.

Dusi stars Thulani Mbanjwa, Khumbulani Nzimande and Nkosi Mabaso romped away to claim the K3 title for Team MyLife, as the race once again fielded the world’s biggest entry of these unique three-seater kayaks.

In another world first, Rhodes students took the solitary K4 downriver, despite demolishing it in Keith’s Flyover on the first stage, and entrenched themselves as firm crowd favourites by managing to shoot Cradock Weir on their second attempt as part of their fundraiser for the Cradock Cancer Care Unit.

The two K2 crews at the front of the race paddled in black armbands as a tribute to the two paddlers who passed away on the first stage of the race on Friday. 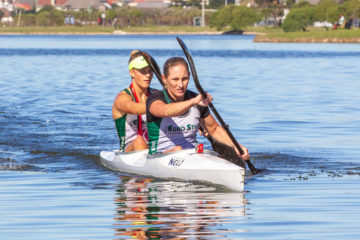 The appetite for the 2021 Fish River Canoe Marathon is evident in the stacked entry list of potential race winners for this year’s South African K2 River Marathon Championships starting on Friday at Grassridge Dam. Read more…