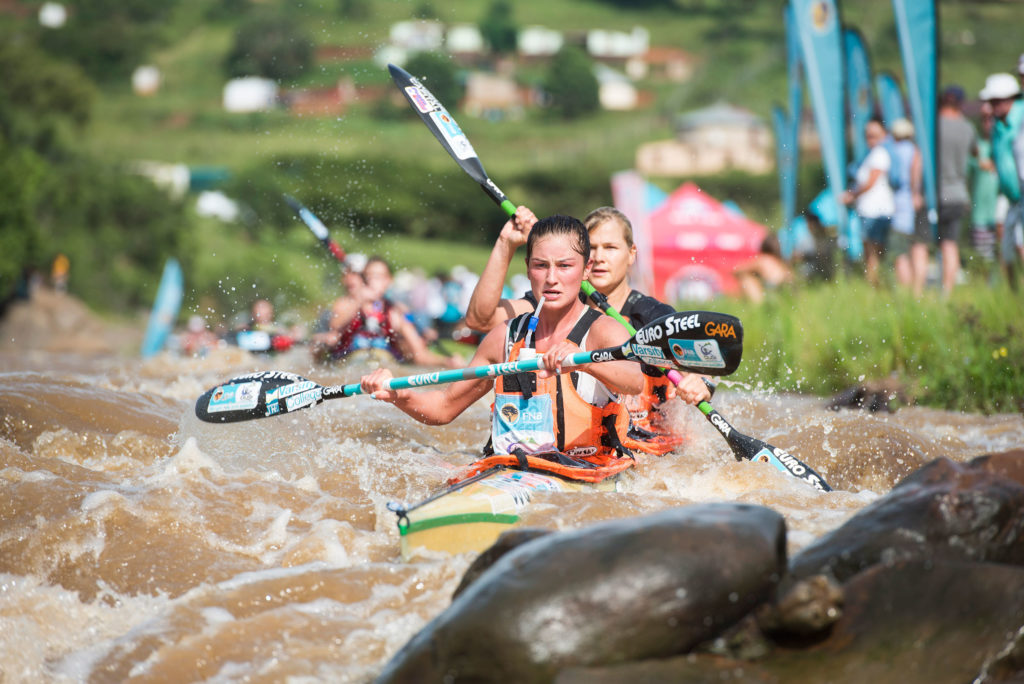 With the ICF World Marathon Championships just three weeks after the Hansa Golden Crisp Fish River Canoe Marathon, the race will play an integral part in the preparation of a number of the stars heading to China to do battle in the global marathon showpiece.

The Fish has been moved a week earlier this year and will take place on 27 and 28 September positioning it ideally as a last intensive competitive outing for the elite paddlers before they start their taper down for the World Championships starting on 17 October.

Adding to the looming battle on the brown waters of the Fish River, the race will also double as the South African K2 River Championships, ensuring that almost all of the country’s best K2 combinations will be on the start line to challenge for the CSA medals.

It has been confirmed that South Africa’s current World Champion K2 pair of Andy Birkett and Hank McGregor will not be racing together at the Fish this year.

Birkett became the second South African after McGregor to do the K1 and K2 double at last year’s Marathon World Championships and it seems the 29 year old East London-based star is focusing exclusively on defending his two global titles.

McGregor, however, is expected to be out to try and reclaim the K2 Fish title that has evaded him since 2013 when he won it with Grant van der Walt.

With the McGregor/Birkett combination not happening, the chatter in the canoeing community now centres on who will be approached by McGregor for the two-day race into Cradock.

The one combination that isn’t a secret or shrouded in speculation, is the brother combo of Ryan and Greg Louw.

The pair has been hard in training with the Sella Descent in Spain and the Breede Canoe Marathon in the Western Cape being their build up races for the Fish.

Greg Louw won the Fish in 2017 with Birkett, making him the last Eastern Cape local to win their home canoeing major, and the hero of the Cradock community in which he grew up.

Last year’s Under 23 champion Stew Little, who finished runner up to Andy Birkett at the N3TC Drak Challenge in January, will be teaming up with Berg River Canoe Marathon winner Hamish Lovemore for the upcoming Liebenbergsvlei Marathon. That could suggest that the Varsity College room-mates might put in a Fish entry together.

Given the prestige of the Fish, there will be a number of top class elite crews threatening the podium with a strong contingent from the Western Cape and from KwaZulu-Natal expected to fight it out for national bragging rights.

From a ladies perspective, defending K2 champion Jenna Ward will be contesting the 2019 marathon world championships with Kyeta Purchase and the duo will pair up for their first river race together since the 2015 Fish.

Last year’s K1 champion Bridgitte Hartley will also be on the plane to China and will be racing in the women’s K2 race with Christie Mackenzie in Shaoxing and the pair have already lodged an entry for the Fish.

Another entry that is confirmed from a women’s perspective is that of Alex Adie and Kim van Gysen.

The potential combinations for this year’s national K2 championships do make for interesting reading and a mouth-watering 82km of racing from Grassridge Dam to the Cradock Sports Complex at the end of September.

Fish organisers expecting the year’s biggest paddling festival to go ahead With the current uncertainty surrounding the coronavirus outbreak worldwide, organisers of the 39th edition of the Fish River Canoe Marathon are confident that they Read more…

Having trailed by just a second overnight, it was the pairs of Stu Maclaren and Jasper Mocké, and Jenna Ward and Kyeta Purchase who claimed the overall Hansa Fish River Canoe Marathon spoils after an Read more…

Despite a men’s and women’s race that went down to the wire, it is the pre-race favourites Hank McGregor and Wayne Jacobs and Christie Mackenzie and Bridgitte Hartley who hold minute advantages going into Saturday’s Read more…